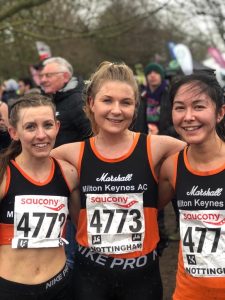 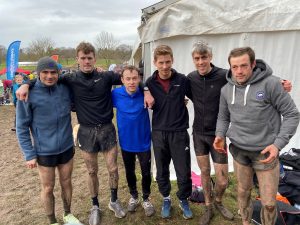 Polo Burguete ran a superb race in the Senior Men’s National Cross Country Championships, over a very muddy course at Wollaton Park, Nottingham. He moved through the field after a steady start, and gained four places in the last mile to finish 38th in 46:28. This is the best-ever by an MMK athlete in modern times, three places better than Tom Comerford achieved in 2011. Steve Tuttle, who has had a torrid time over the last two years, is beginning to show his previous fine form, finishing 182nd in 49:43, closely followed by his brother James, 195th in 49:56. Sam Winters moved to number 11 on the MMK all-time National bests with 220th place. The Team of six finished a fine 19th with 1502 points out of the 115 teams that finished.

In the Senior Women’s race Marshall Milton Keynes had three in the top 100. Elle Roche lost a few places after a fall close to the finish but picked herself up to finish a fine 72nd in 38:09. She was almost caught by a fast-finishing Alice Ritchie 77th in 38:13. Alice moves to 8th place in the MMK all-time top 20 places in the Women’s race. Lara Bromilow, who has suffered this winter from a hip problem, was pleased to finish 89th in 38:40. The team, with Natasha Baker, finished an excellent 15th with 490 points out of the 94 teams that closed in.