Lara and Diane travelled to Swansea to represent England at the Vets International cross country. For Lara, who had been sidelined for most of the last seven months with a hip injury sustained at the London Marathon, it was an opportunity to assess her fitness. Soon after the start of the Women’s and M65+ Race, Lara moved in to third place for the opening lap of three. However, on the second lap she was overtaken by two English, two Irish and one Scottish runner, dropping down to eighth place, with the Irish set to win the team event. On the final lap Lara gradually moved through the field overtaking the two Irish and one English runner to finish fifth overall and third in the F35 race, to steal the win for the English team.

Diane, not feeling too well before the race, was not really able to give her best and could only finish 140th (12th F60) in the field of 196 runners.

The pictures below, taken by Steven Mowll, shows Lara soon after the start, and with Diane after the race. 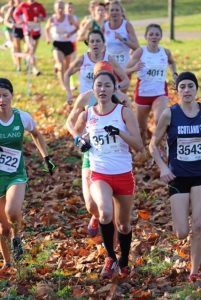 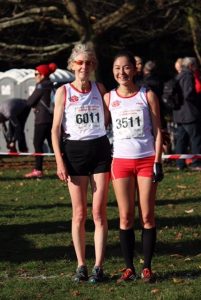 Full results of the Masters International