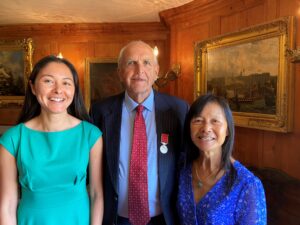 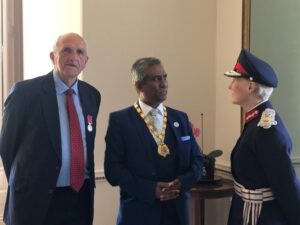 Club Co-chair, Mick Bromilow, awarded the British Empire Medal in the New Year’s Honours List, attended his investiture at Penn House, near Amersham. The medal was awarded by Countess Howe, Lord Lieutenant of Buckinghamshire, in the presence of the Mayor of Milton Keynes, Mohammed Khan. The citation below was delivered by the Deputy Lieutenant and High Sheriff of Buckinghamshire Debbie Brock.

Pictured above with Mick are Lara and Fi Han, Mohammed Khan and Countess Howe.

Mick’s love of sport is handed down from his grandfather who when war was over, left the trenches of WW1 and joined Liverpool Football Club playing for the Club for 10 years and being capped for England 5 times. During the Second World War he was Leicester City Football Team Manager. His Grandson, young Mick remembers a Primary School Cross Country, finishing fifth the first time and second the next – a taste of sporting success and the beginning of his life in athletics.

Mick read Mathematics at Oxford University at Undergraduate and Post Graduate level and was an Oxford Blue for Athletics and Cross County. A job at the OU brought Mick to a developing Milton Keynes. He joined Wolverton Athletics and Cycling Club in 1975 and became club secretary later that year when it changed to Milton Keynes AC, coaching for 15 years before taking over as chairman in 1992 and then spent 30 years in the chair. His leadership transformed the club from being a small local organisation to the present day – one of the largest athletics clubs by membership in the country. The Club is inclusive in all ways, members ranging across all ages from 9-90 and a wide variety of ethnic backgrounds. He nurtured an ongoing partnership with Jim Marshall and one which would help support not just the club but aspiring athletes from 2006 and onwards.

Throughout his tenure as chair, the club has had responsibility for managing the athletics stadium at Stantonbury, with volunteers looking after everything from track bookings to grounds maintenance. He inspires committed volunteers and in 2020 they were awarded the Queen’s Award for Voluntary Services in recognition of the sustained work over many years.

Mick has overseen fundraising, the development and maintenance of first-rate facilities and coaching for athletes to compete locally, regionally and nationally. He has provided an enabling environment where young athletes can succeed – the names Greg Rutherford, Mervyn Luckwell and Craig Pickering are synonymous with Marshall Milton Keynes Athletic Club, the Club however supports people whatever their hopes and aspirations.

Mick is held in high regard by many from the world of athletics, for establishing the Southern Athletics League and for hosting national and regional events. He has been an influential member of many county and regional athletic bodies including the Chiltern League, National Youth Development League, East Midlands Road Running Grand Prix Series and National Athletics League.

Mick was awarded an Honorary Master of the University Degree from the Open University for his contribution to Education and Culture over the past 40 years. His background in Mathematics enabled him to develop a performance-based scoring system for senior athletics which has been used by the National Athletics system.

For his dedication to Athletics, his incredible commitment to volunteering, for the thousands of lives he has had such a positive impact on, Lord-Lieutenant, it gives me great pleasure to present Dr Terence Michael Mick Bromilow for the honour of the British Empire Medal for services to Athletics in Buckinghamshire.