Buckinghamshire Schools had one of their best days for many years with four of their teams finishing in the top eight at the ESAA Cross Country Championships, held at Hop Farm, Tonbridge in Kent.

The Intermediate Girls team won their event while the Junior Girls missed the medals by a whisker in fourth place. The Intermediate Boys finished sixth while the Senior Girls were eighth. A small county like Bucks would rarely have more than one or two teams finishing in the top ten. 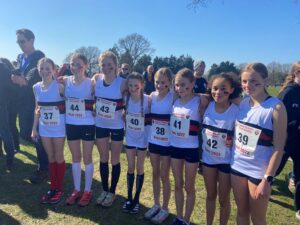 Marshall Milton Keynes had thirteen runners representing Bucks Schools with two representing Northants Schools. The age groups are different in this event with top-year under 13s at the National Championships being first-year Juniors in this event. In the Junior Girls the first four were MMK athletes (all first year Juniors), led home by Katie Webb (10th), with sister Lauren 50th, Sophia Chapman 58th and Elsie Jacobs 60th. Katie Webb picked up her England vest for the Mixed Relays in the home Internationals in Wales next weekend. Pictured above is the Bucks Junior Girls Team. 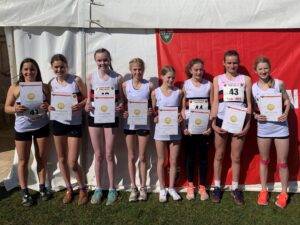 Third and fourth Bucks runners home in the victorious Intermediate Team were Millie Freeland in 22nd and Maddie Pearce 38th (pictured above third and fourth from the left respectively). The picture below shows the Inter Girls at the medal ceremony. 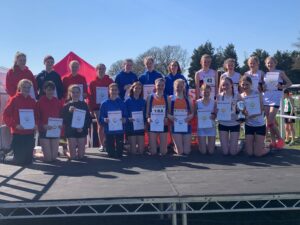 In the Intermediate Boys Team that finished 6th, were second scorer Harris Kentish in 42nd place with Harry Totton 100th. Zak Freeland was the second scorer in the Senior Boys race in 113th place.

Orla Enright, representing Northants Schools was 136th in the Junior Girls Race in 13:54, while Kian Nicholson was 193rd in the Senior Boys race in 26:51.