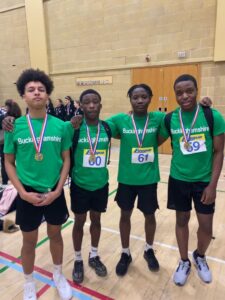 The Bucks Under 15 boys finished first and qualified for the National Sportshall Championships in April – another first, featuring 4 out of 6 from MMKAC

Ross Priestley wins the Under 13 boys Standing Long Jump event with a new club record of 2.60m (beating the mark of Ethan Wiltshire).