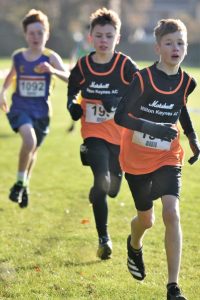 On  a bitingly cold and windy Stopsley Common, the runners of Marshall Milton Keynes battled through to take second place overall, behind Chiltern Harriers. After three rounds, Chiltern have a strong lead but MMK are within striking distance of Bedford.

In the Senior Women’s race. Elle Roche had a really strong run to beat all-comers, finishing half a minute ahead of the field. The women’s team struggled, finishing fifth after a very promising win in the opening fixture.

The MMK U13 Girls were dominant finishing in the first four places, thanks to Katie Webb, Olivia Chilton, Lauren Webb and Elsie Jacobs. They also filled half of the first 30 places to win on the day and strengthen their hold on the overall team title.

Daniel Southgate won his third straight Chiltern League race, although the chasers were a little closer this time.

For the senior men there was a strong showing by the Under 20s, led by Matthew Dicks. However, they struggled to close in their ten scoring runners to finish fifth on the day.

Pictured above, by Brian Graves, are the winners.

Full results from Stopsley Common and rankings after 3 rounds

Pictures by Mark Easton (U17 and Senior only)

Pictures by Barry Cornelius (U17 and Seniors only)