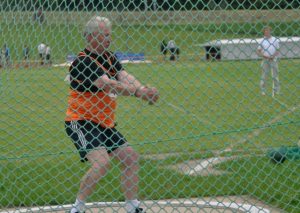 Friends, family, athletes and fellow coaches gathered to commemorate the life of MMK’s Hammer Coach, Jack Kee, who died, aged 82, on 26 November after a long battle with liver cancer. David Millett gave the following eulogy on behalf of the club:

I speak as someone who has known Jack for some 20 years, primarily through his association with Marshall Milton Keynes AC.

Jack Kee was a remarkable man and it was a privilege to have known him.  A strong man – literally.  Also resilient, dedicated, loyal, hardworking and perceptive about people and situations.  Not least a really good colleague.

Jack was a considerable sportsman, athlete, coach and volunteer.  Much of that was already in place before he even arrived at the Club in 1982 a British Hammer title holder.  In his army career he played rugby and basketball – in addition to participating in athletics.  He was also no mean skier!

A cursory stroll through Jack’s athletic record reveals him as a multiple medal winner at Regional and National Championships.  His name appears regularly at, or near the top, of all time age group rankings in events like throws pentathlon, hammer and discus.  Most poignantly, his latest published performances relate to a Hammer Circle reunion in October.  Jack was one of the stalwarts of the Hammer Circle that has done so much to promote the event since the 1950s.

Many will know Jack as a coach.  When UK Athletics invested heavily in coaching to create a legacy after the 2012 Olympics Jack was part of the National Coach Development programme that helped share and cascade best practice.  As I look around this room there is a fair representation of the athletes that benefited from Jack’s coaching – a number achieving National Championship success in throws and mirroring their mentor in being amongst the best in the country in their age group.

Despite all his achievements and accomplishments Jack had an understated side.  The Club is unusual in using a track subject to a joint management agreement with the Stantonbury School and Milton Keynes Council.  A key aspect of which is the reliance on volunteers to maintain the track.  Jack was an absolute pillar of that arrangement.  He was effectively  Stadium Manager for some 20 years.  His range involved being the key point of liaison with the school, managing bookings of the track, and considerable hours and skill devoted to maintaining the track – with all the complexities associated with that.  All done in an unfussy way.

As a fellow coach, who benefited greatly from Jack’s support and feedback, I often feel the best measure of a coach is the legacy they leave.  By that measure Jack stands tall and I am sure there are many in the sport, the Club and the community that will continue to show the benefit of his influence.  There will be a plaque on a seat overlooking the hammer circle marking our appreciation of that legacy.  Equally meaningful, for those who worked with him closely, there will also be a picture of him on a hammer cage supplemented with one of his regular commands to his athletes.