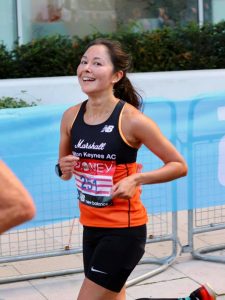 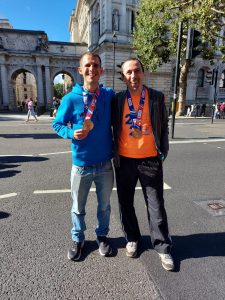 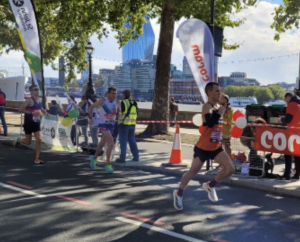 Elliot Hind, (pictured above, near the finish) running in his first marathon for three years, knocked 37 seconds off his personal  best to record 2:31:58 to go fifth in the MMK all-time rankings.

Two other MMK runners, Dan Webber and Gary Blaber ducked under three hours. Andy Cowdrill knocked 35 seconds off his personal best set in Chicago two years ago. Lara Bromilow, slowly recovering from ligament damage sustained in the Big Half at the end of August, was happy to complete the run in 3:08:35, just behind Matt Turner. Steve Coomber, in his first marathon, recorded 3:12:52.

Diane Baldwin ran the Virtual Race in 4:04:42 while Chris Rattenbury, competing in a wheelchair, pushed himself round the course in 4:05:50.

Eddie Hartigan ran for the South East in the London Mini Marathon placing 32nd in the under 13 boys race, 3rd scorer in his Team that came 2nd behind the North West and in front of 3rd placed Wales.