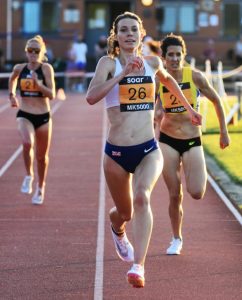 The SOAR MK5000 PB Special was held on a scorching hot day with the mid-afternoon temperatures of 28 degrees Celsius. Many found the conditions to hot to handle with 31 of the 229 starters not making it to the finish line.

The women’s race, held in slightly cooler conditions at 8:20pm, involved a three way battle for the win between Abbie Donnelly, Morag Millar and Jenny Nesbitt with an inspired Abbie winning in 15:42.65 from Morag (15:43.57) and Jenny (15:44.90). Abbie took nearly 40 seconds off her personal best , with Morag taking over 25 seconds off hers. The winning time was just five seconds slower than Jess Judd’s 2018 MK5000 Stadium Record.

As the men’s race started the sun dipped below the horizon, the temperature cooled significantly and the wind dropped. Almost perfect conditions for racing produced some scorching hot times (much quicker than that in the England Athletics Championships in Bedford on the same day). Five men dipped under 14 minutes with Jack Rowe taking the victory in a new stadium record of 13:41.40. The old record of 13:57.33 was set by Ben Bradley in 2019s MK5000.

Full results from Stantonbury with lap times for the last ten races. Apologies to the runners in the first four races, but a four-car pile-up on the M1 significantly delayed the photofinish team.

3000m times will be added later today and photographs of most of the runners will be included as soon as they are available.