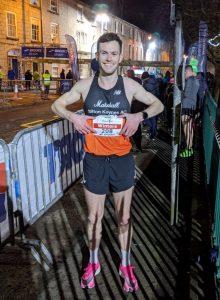 Sam Winters (pictured above) after running into fifth place at Campbell Park last Saturday, was in fine form again, finishing 73rd in 14:34 to knock six seconds off the record. He only just held off Polo Burguete, who won the Wolverton 5 mile race last November, by two seconds, as he finished 76th in 14:36.