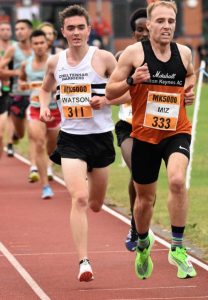 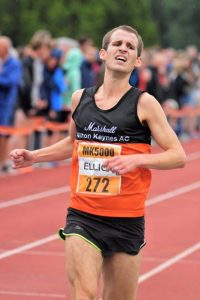 In the women’s elite race, Jess Judd was content to sit in the pack for most of the race, but accelerated into the last kilometre to finishing comfortably ahead of the field in 15:37 (the same time she achieved last year). Aldershot’s Louise Small was second in 15:48, with Nicole Taylor just behind in third as five women ducked under 16 minutes and with three of the top six finishers achieving personal bests.

In the men’s race, Jack Gray went with the pacemaker to establish a lead over the chasing pack, but was swallowed up in the last kilometre to finish sixth. There was a real battle for the line as Aldershot’s Ben Bradley edged out Mohamed Mohamed (Hillingdon), as John Sanderson (Guildford) threw himself at the line to grab third spot by 0.03 seconds over England Athletics 10000m Champion, Adam Hickey. Five men ducked under 14 minutes, with four of the top six achieving personal bests.

Many thanks to all the volunteers who made this event zing.

78 pictures of the Elite races by JHMImages

70 pictures of the Elite Women’s race by Hugh Robinson

22 pictures of the Elite Men’s race by Hugh Robinson

18 pictures of the B race by Hugh Robinson

20 pictures of the C race by Hugh Robinson