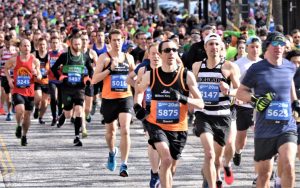 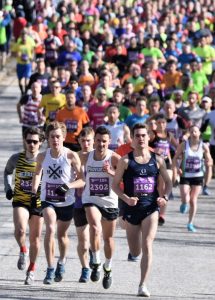 3772 runners completed on of the four races in the Milton Keynes Festival of Running. A huge thank-you must go to the 100-plus volunteers who braved the cold winds to support and cheer on the runners.

MMK Results from the MK Festival, with pictures by Brian Graves

In the 20 mile race, the first MMK runner home was Dan Webber in fourth place in 2:01:07, just half a minute slower than his best time. The first MMK woman was Lara Bromilow who knocked almost four minutes off her best time with 2:12:56, to finish 31st and third in the Women’s Race. 937 completed the race.

Full results of the 20 mile Race. 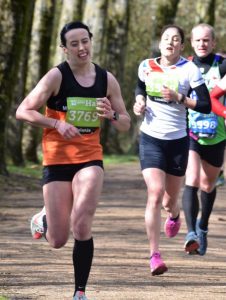 In the Half Marathon, the first MMK runner was Ian Wood, who finished fourth in 77:55. Melanie Wood, in her first Half Marathon, ran 90:52 in 72nd place to finish fourth in the Women’s race. 1179 completed the race.

Full results of the Half Marathon

In the 10km, Elle Roche ran a personal best 37:37 to win the women’s race and finish sixth overall, just one place ahead of the first MMK man, Chad Lambert, who was returning after a long injury, seventh with 38:35. 1209 completed the race.

Full results of the 10km race

In the 5km race, fourteen-year-old Alex Brent was first MMK runner to finish in fifthplace with 18:31. The first MMK Female was 12-year-old Alice O’Leary who finished 42nd in a pb 22:54, to finish fifth in the women’s race. 447 finished.

Full results of the 5km race